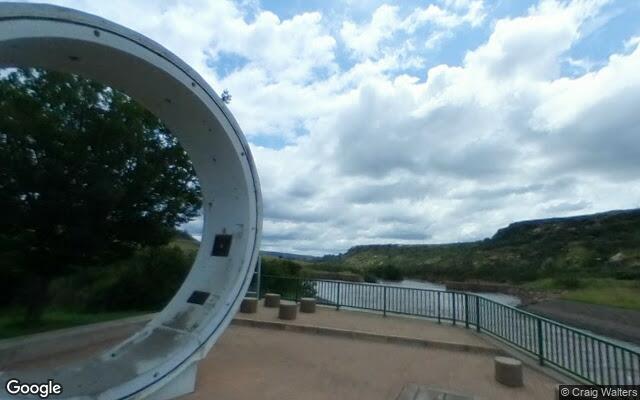 A short distance from the village of Clarens is the Ash River Outfall.  The word ‘outfall’ refers to water being ejected from an underground tunnel into a weir before it flows into the Ash River.  Clarens was well known during the nineties for the part it played in the Lesotho Highlands Water Project, and the Ash River Outfall bears testimony to the project’s ultimate success.  A self-drive tour of this area will provide you with a fascinating couple of hours of splendid vistas as well as access to the visual legacy of this acclaimed engineering project.  In addition, you might be lucky enough to catch a glimpse of white water rafters bouncing down the rapids.  Leave Clarens on the main tarred road north towards Bethlehem, route R712 (on some maps R711).  On the left, just before the majestic Titanic Rock, you will see the Maluti Mountain Lodge, which was the favoured “watering hole” of tired construction engineers during the nineties.  As you rise out of the valley over the Naauwpoort Nek, the Free State farmlands stretch before you, framed on the right by an imposing flank of Mount Horeb running away to the north east.  Further on are some examples of free-standing sandstone rock formations, so typical of the Eastern Free State landscape.

The Ash River Outfall is about 10 kms from Clarens.  You will pass two dirt road turn-offs to the left, the second being the Zaaihoek / de Krantz turn-off, before you reach the turn-off to the Outfall, which is well signposted.  A short tarred road takes you to the car park where you can leave your car and wander about the site.  The Lesotho Highlands Water Project agreement was signed in 1986 and, after lengthy preparations, construction started in the early 1990s and continued for a large part of that decade.  An influx of engineers and construction experts from several countries around the world set up homes in and around Clarens to tackle one of the biggest civil engineering undertakings in the world at that time.  A large water-carrying tunnel, known as the Trans Caledon Tunnel, was brought under the Maluti Mountains from Lesotho’s high altitude dams to the Ash River Outfall.  On the left side as you enter you can see the water flowing strongly out of the side of the hill, where the tunnel emerges into a rectangular concrete weir.  It continues to flow rapidly through and beyond several weirs, after which the Ash River itself joins it in a comparatively weak trickle.  At the Outfall site is a segment of the tunnel that has been erected as a monument to the project and several commemoration plaques are displayed.  The objective behind the whole project was to transfer excess water from  Lesotho to the water thirsty regions of Gauteng.  Left unharnessed, much of this precious water would have ended up in the Atlantic Ocean, but the new dams constructed in Lesotho, together with the Trans Caledon Tunnel, facilitate the diversion of water to South Africa’s industrial heartland by means of gravity.  The Outfall, of course, has turned a small stream into a strong fast-flowing river, and this you will see further along the drive.

So, turning back along the main road towards Bethlehem, you continue for about 3 kms until you reach the turn-off to the left, the S217 dirt road.  Follow this for about a kilometre and, as the road dips into the valley, you will see the tree-lined Ash River before you.  This is a good spot to pull up, get out and walk onto the bridge.

If you’re an adrenalin enthusiast you might be tempted after seeing these rapids to make a booking with one of the White Water Rafting outfits in Clarens.  A positive spin-off from the Water Project is that this part of the Ash River is consistently flowing at more or less this rate on every day of the year.  Depending on the time of day that you arrive at the bridge, you are in a prime position to watch the rafts come down over the rapids.

The route continues along this road for several kilometres, affording pleasing views of the northern slopes of the Rooiberg Range ahead of you.  To the right you will notice what seems to be a shallow gorge running parallel to the road.  This is part of the Ash River tributary system coming down from the Rooiberg slopes, gradually forming one river downstream.  Keep your eyes open for various species of game on the farmlands to the left, where you could spot black wildebeest, blesbok, springbok and impala.  When the road curves to the right to head in a westerly direction, ultimately joining the main route R26 between Bethlehem and Fouriesburg, pull over and reassess your route.  At this point there is a road turning off towards the left.  It should only be taken if your vehicle has a high clearance.  If not, you will need to return to Clarens on the route already driven, or continue to the R26 (not part of this route).

The road to the left takes you for about five kilometres through pristine farmland against the backdrop of the Rooiberg.  On two occasions you cross small tributaries that form the Ash River lower down.  When you reach the tarred road at the Zaaihoek / de Krantz junction, you are back on the R712, and you turn right to return to Clarens.

Self drive: Clarens to Katse Dam  (Clarens News: March 2014.) Article by Rod and Rose Smart on their Katse experience – with tips on driving in Lesotho.)